The free trial period is 60 days after which no sending or receiving is possible unless a license is obtained. The stored emails can be viewed also after the trial period.

Superior protection for the real world

EndCryptor protects old encrypted emails - that were copied by an adversary when they traversed the internet - also then when the adversary gets current encryption keys by hacking into user's computer.

No knowledge of cryptography is required. The user interface is similar to a typical email client. User's current email account is used to deliver the encrypted emails.

The email is encrypted at sender's computer and it can be decrypted only at true receiver's computer.

It may be possible that before the year 2030 there will be computers that can break current classical public keys. EndCryptor uses classical public keys and new quantum attack resistant public keys. Note that otherwise current encrypted traffic can be copied and decrypted by quantum computers when (if) they become reality. When two persons communicate in turns the quantum protection starts from the second email (included). NOTE: On July 30, 2022 scientists published an article which shows that the used SIDH post quantum system can be broken. Currently we use SIDH in a hybrid setup: an attack is successful if it can break both current classical keys and SIDH - this is not the case now and current computers cannot break current messages. Post quantum cryptosystems are relatively new and it is possible that weaknesses are found - therefore a hybrid setup is used. We are considering other Post Quantum public key solutions now.

Patented technology, state of the art cipher and public keys

The protocol that provides the features has been patented in USA. The implementation of symmetric encryption and public keys uses publicly available source code developed by the scientists who designed the systems.

EndCryptor offers features that are essential for real world protection: backward security and recovery from an attack. It is important that there is protection when a hacker gets access to current secret encryption/decryption keys.

EndCryptor is more secure than competitors

Properties under classical attack when the security database on Alice's computer is exposed together with its access password (suppose that Alice is communicating with Bob): 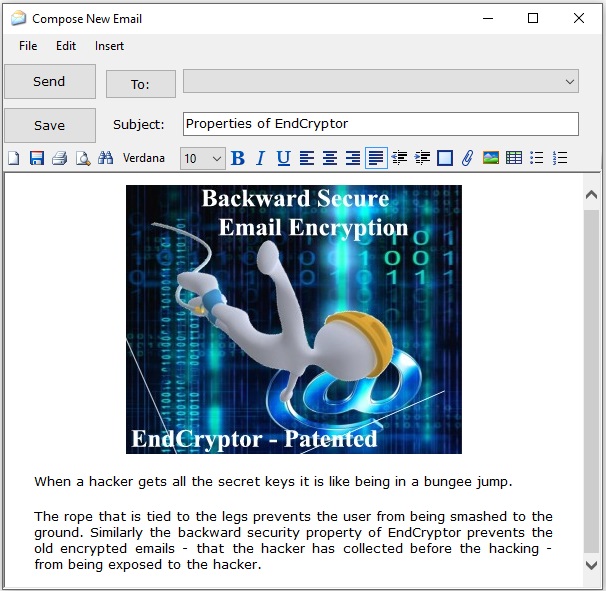